Note: the final EN 1793-5 was released in March 2016. References to the 2014 draft version have been changed accordingly. 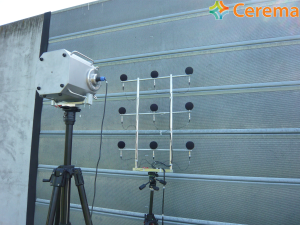 The EN 1793-5 standard describes a procedure to measure the reflection properties of road traffic noise reducing devices in situ. The 2003 version of the standard has been supported by Dirac and the Zircon probe since its publication. A new version has been released, and we have updated Dirac to provide limited support for EN 1793-5:2016.

Compared to the 2003 version of the standard, numerous changes have been introduced, the most prominent of which are the use of a 9-microphone array and modified calculations.

Hardware changes
Previously, the reflection measurements were performed using a single microphone mounted on a loudspeaker-microphone probe such as the Zircon. New is the use of 9 microphones in a 3 by 3 grid with a nominal distance of 40 cm between the microphones. Note that there is not a strict requirement to have the microphone grid attached to the sound source; the grid can be placed on its own tripod. 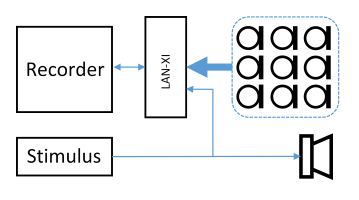 Software changes Dirac can import multi-channel .wav files, and split the channels into separate single- or dual-channel files that are added to a project automatically. To automate the subtraction processing, a python script is available that can be run from the project window. The script will generate 9 new files from which the partial RI values can be calculated.

Because the microphones are no longer mechanically attached to the loudspeaker, the distance between the microphones and the loudspeaker may change somewhat between the free-field reference measurement and the measurements in front of the barrier. The draft standard now specifies a procedure to line up the reference signal and the reflection measurement before subtraction. Dirac already used a similar procedure for the 2003 version of the standard. New is the addition of a parameter Rsub to quantify the suppression of the direct signal in the reflection measurement.

With provisions to change the time windows on all the signals in a single operation, the required partial RI result can be exported to a spreadsheet where these values are combined with the source directivity values to a single number DLRI parameter.

Future developments Version 7 of Dirac will have the ability to handle multiple channels, making the procedure to acquire 9 impulse responses much simpler and faster. Given enough interest, an updated Zircon sound source and associated hardware will be developed.

Downloads Technical note 12 - 'Using Dirac for EN 1793-5 measurements' describes the measurement procedure in detail. This document is also contained in this .zip file together with the Python script and the spreadheet. The .zip also ccontains a script and a spreadsheet to calculate the insulation (SI and DLSI) following EN 1793-6:2012.