Emergency evacuation and voice alarm systems sometimes use high-frequency pilot tones to continuously monitor the connections between the individual elements. Failure of any speaker to produce the pilot tone can thus be detected very quickly and an appropriate error message can then be generated. These pilot tones have a frequency beyond the range of human hearing at around 20 kHz. An example of such a system is the Bosch Praesideo. In rare cases, the pilot tones have been found to interfere with acoustic measurements.

A typical magnitude spectrum measured in a hall equipped with an emergency system using pilot tones can be seen in the image below:

The pilot tone can potentially pose several problems for acoustic measurements because although it is not audible, it does fall well within the 16 kHz octave band and the 20 kHz third-octave band. The first indication that a pilot tone is present will be that the LAeq measurements will show a much higher level than would be expected from the audible ambient sound level. Obviously, these elevated signal levels may also appear in some calculated parameters.

If the measurement microphone is very close to the source of the pilot tone, and the normal stimulus signal has a relatively low level, then it may be impossible to correctly identify and deconvolve an Echo signal. As one might expect, Dirac has a solution for the rare cases in which this may happen. This is to record the raw responses to the stimulus and then filter the raw response before using the import function to retrieve the impulse response. Recording the raw response can easily be achieved by selecting 'None' as the stimulus in the measurement window when using an external stimulus such as the Echo. When using an internal stimulus, the 'Skip deconvolution' option on the 'Process options' tab could be checked. 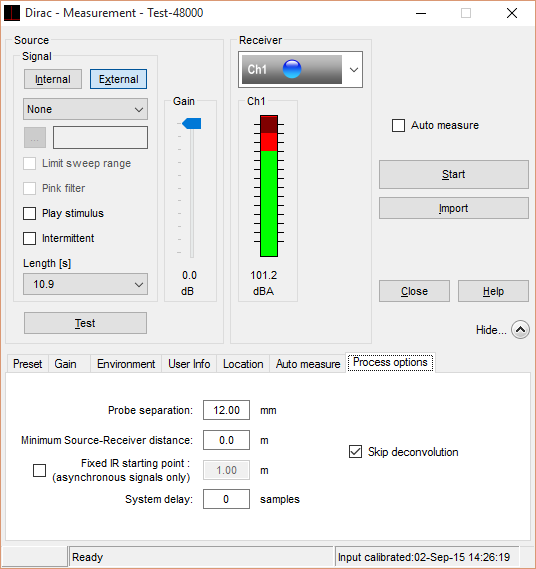 The most effective filter for removing the pilot tone will be a notch filter centered at the pilot tone's frequency with a narrow bandwidth. Depending on the strength of the signal the filter may need to be applied more than once. 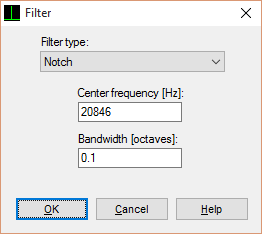 As you can see, when using Dirac pilots tones need not be feared, but you do need to be aware of them. Whether a future update of Dirac needs to pre-filter Echo measurements automatically to remove the pilot tone before processing, depends in part on how often the problem is encountered. Therefore, let us know if pilot tones interfere(d) with your Echo measurements.