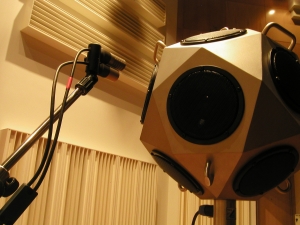 Before the publication of the ISO 3383-3 standard for measurements in open plan offices, the system calibration was only used for the measurement of the Strength (G) parameter, and related parameters such as the early and late strength (G80 and GL), and the lateral sound levels (GEL and LG). Since the introduction of ISO 3382-3, the use of system calibrations has increased significantly.

Performing an accurate system calibration can be a challenging task. For the best results, an anechoic room or reverberation chamber is required, and even there it is difficult to get results with an error margin close to 1 dB. See [2]
Not everyone has easy access to an anechoic room or a reverberation chamber, and therefore the in-situ free-field system calibration method is often used. The following are three important concerns with this type of calibration.

Non-uniform directivity pattern of the omni-directional source
Typical dodecahedron shaped omnidirectional sources used in acoustic measurements have a non-uniform directivity pattern, particularly in the higher frequencies. The example below shows the directivity of an OmniPower Type 4292-L in the 250 and 4000 Hz octave bands. Placing the microphone directly in front of one of the speakers in the cabinet will result in an overestimation of the source's sound power level. Research [1] has shown that this can be solved by rotating the source over 5, 7 or 9 equal-angle steps of 360°/n, while keeping the microphone position fixed. 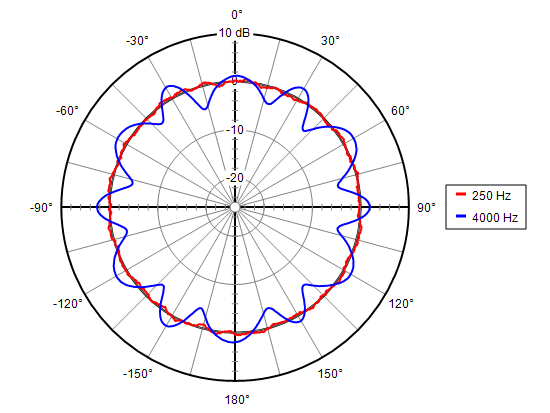 Source-receiver distance
The omni-directional sound source used in measurements is in fact a rather poor model of an ideal point source. Earlier, the far from ideal directivity pattern was discussed. Another deviation from the ideal is the physical size of the source. This can cause some confusion as to what the actual source-receiver distance is in a measurement.

In the configuration displayed above, the start of the impulse response as measured by DIRAC will correspond to the acoustical center (A) of the source. For an OmniPower Type 4292-L this will typically be at 84 cm from the microphone, or 16 cm in front of the geometric center. This difference between the source-receiver distance as measured by DIRAC and the distance between the geometric center and the microphone, results in a corresponding misrepresentation of the SPL at a given distance from the source (center). The graph below depicts the error in dB SPL for a 15 cm difference between acoustical and geometric center as a function of the source-receiver distance. 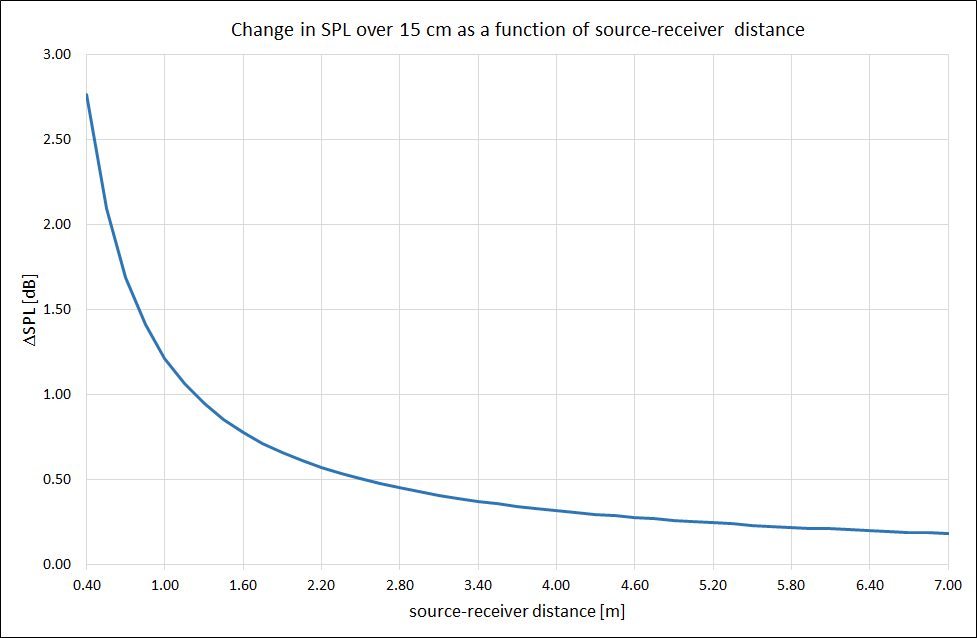 For measurements close to the source the error can be significant. At a typical distance of 1 m the error is more than 1 dB. For distances over 7 m the error becomes negligible (< 0.2 dB).

Note that this option only works correctly if all measurements were taken at the exact same distance from the source. This would be the case if the microphone has a fixed position and the source is rotated over several steps as described earlier.
Leaving the 'Source-receiver distance' field blank, causes DIRAC to calculate the distance from the start of the impulse response, as in earlier versions.