A commonly used DIRAC front end is the Brüel & Kjær Type 2250 (or 2270) sound level meter (SLM) connected to a B&K Type ZE-0948 sound device. In this way the sound pressure level (SPL) can be obtained both by reading out the SLM display and from its analog output signal after analysis by DIRAC.

Under certain conditions, the DIRAC results may exceed the values displayed on the SLM. This phenomenon can be explained from the (substantially white) system noise dominating at the SLM output when not set to the optimal gain. The 2250/2270 SLM output gain is set through the Setup menu:

The graph below shows measurement results read out from the SLM display (green bars) and obtained simultaneously in DIRAC from the SLM output socket (blue bars), at several measured signal levels. While the display always shows the proper value, the output level to a certain extent depends on the set output gain. 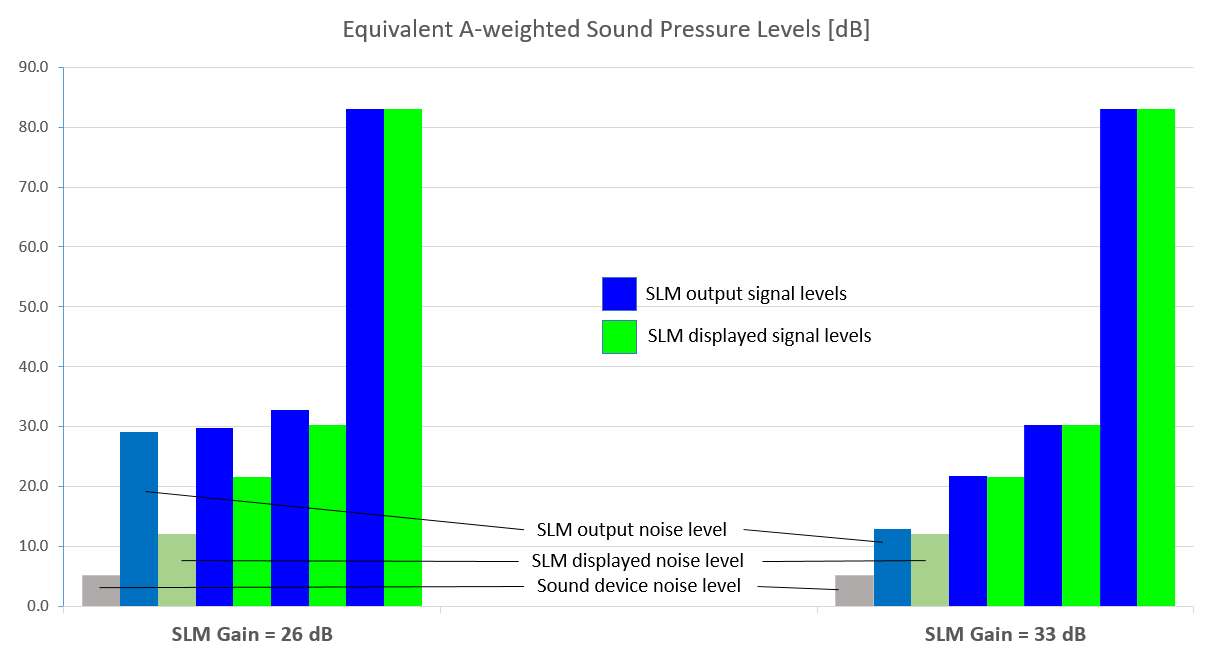 At an SLM output gain of e.g. 26 dB and a low measured signal level of say 30 dB(A), the system noise level at the output will be high enough to affect the measured SPL significantly, in this example increasing it by 2.5 dB. Fortunately, with the 2250 or 2270 this noise level will decrease significantly when changing over from the gain range 0..32 dB to the range 33..60 dB. In the example above, at the optimal SLM output gain of 33 dB, even signal levels as low as 21 dB(A) are output with a negligible error of 0.2 dB. As can be noticed, the ZE-0948 does not really play a role in contributing noise.

Note that with an SLM output gain up from 33 dB, calibrating the microphone using a 94 dB calibrator might drive the ZE-0948 into overload. In that case reduce the gain e.g. by 6 dB during the calibration only, and in DIRAC set the External Gain for the input(s) to 6 dB before starting the measurements.

Another way to avoid overload is by using a ZE-0948 input attenuator cable. The SLM can then be calibrated at the output gain of 33 dB, while the attenuator cable can stay inserted during the measurements and does not require an external gain setting in DIRAC. Attenuator cables for the ZE-0948 can be ordered directly from Acoustics Engineering.

In general, it is true for any SLM that in particular at low measurement signal levels the gain can be very critical and should therefore be chosen carefully (if at all settable) to minimize measuring errors due to system noise.